While on a four-wheel-drive trek down the beach, we noticed something in the sand. It was a dead sea turtle.

We told our daughter what it was. I could see the questions in her eyes. I could have pretended we didn’t see it, or glossed over it like it wasn’t a big deal.  But it was a big deal. It’s not a nice sight to see a dead turtle on the beach.

We’d listened to a talk the previous day and had learnt that over 80 turtles wash up dead on that stretch of beach each year because they consumed some kind of rubbish.

So, I did the counter-intuitive thing.

We stopped the car, got out and took a closer look.

I asked my daughter why she thought the turtle had died.

I told her that the turtle could have been old and died naturally but it also could have died because it may have eaten rubbish.

I explained that our plastic bags look just like jelly fish and so the turtles eat them. I asked her what she thought would happen to a turtle if he ate a plastic bag. She knew he would get very sick or die. 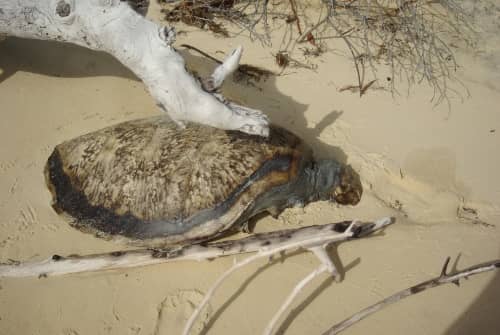 Just talking to my daughter about the dead sea turtle made her think.

She turned to me and said ‘Mummy, we need to pick up rubbish to save the turtles.’

I was so proud that she initiated the action herself – it’s not easy for young children to reach those kinds of conclusions on their own. It warmed my heart to see the concern she had for other creatures.

So, we started to pick up rubbish. Miss Possum would shout ‘Rubbish!’ and we’d all have to go and collect it. We ended up with a big bag filled with bottles, netting and plastic bags.

Children can turn something negative into a positive quite easily.

Each parent needs to make their own decisions based on what they think their child can handle, but I believe that it’s important we don’t hide the truth from children; that we are honest whilst still being sensitive to the child’s feelings.

I’m so glad we stopped the car.

The scene may not have been very pleasant but it ended with Miss Possum learning empathy, compassion and creating change to save other turtles from the same fate.

It has also lasted longer than the holiday too. She still points to rubbish and we pick it up.

« Wildlife Activities for Toddlers to Enjoy
Why give your kid a camera? »