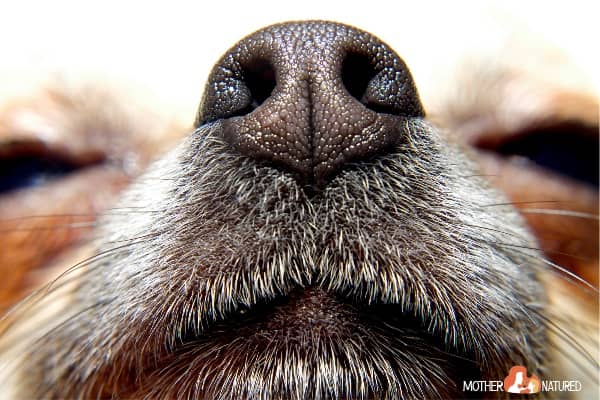 Many animals have a keen sense of smell.

Two-thirds of a shark’s brain is devoted to smelling (so it’s no wonder we stay out of the water if we are bleeding!) Bears too have excellent smell – their noses are enlarged with folds that hold thousands of smell receptors.

Koalas only eat around 50 species of gum leaves, yet there are more than 500 species out there. Imagine having to sniff out the ones they like to eat!

Children love smelling games, and although we’re not even close to the top of the best smelling list, we can still have fun trying to smell like other animals can. This activity is also a great starting point for teaching children about the five senses.

For this game, I took five jars from our recycle box and covered them with material. I used a pin to fasten the two ends together; this makes it easy to take off if you need to clean the inside of the jars. Salt and pepper shakers work well, too.

While my daughter was playing out on the trampoline, I added some food to the jars and then covered the tops of the jars with tissues and secured them with a rubber band.  It works best if you leave them for a couple of hours to let the smell fill the container, but it still works quite well straight away.

My daughter was given the chance to smell each container. She had to name the food inside each jar and then name an animal that eats the food.

Grass – We mow the lawn regularly in Australia, so I knew my daughter would know the smell of cut grass. It was perfect because many animals (like horses, kangaroos, cows and deer) eat grass.

Honey – I used honey to trick my daughter. I thought she might say that bees eat honey, but she didn’t! She knew that bears like honey. Other animals that eat honey include badgers and raccoons.

Banana – Who eats banana? Monkeys do, of course – and so do bats, parrots and insects.

Eucalyptus leaf – These leaves are very strong-smelling but most children will find this quite hard. How often do we go around smelling gum leaves? Possums, stick insects and koalas do, though.

Carrot – The smell of the carrot is much stronger when it’s grated. What eats carrots? Rabbits!

Biscuits – Yes, another trick for my daughter. She paused after smelling this one. I was hoping she would say ‘I eat biscuits,’ but instead she answered ‘the cookie monster eats biscuits.’ Hmmm, the cookie monster isn’t technically a live animal… but I’ll give her that one because cookie monsters are real when you’re four!

You can use many other foods that you think your child would recognize; perhaps crushed up nuts (for squirrels) or apples (for bats).

If you have a young child, you can make it easier for them by printing out photos of the animals. Children would then only have to match the smell with the animal picture.

My daughter loved this activity. She loves trying to guess each smell and then thinking about the animals that would eat it. Her favourite part was looking at the bottom of the glass jar to see if she was right.

Who would have thought a sense of smell game could turn out to be so much fun!

« Keeping Tadpoles: Everything you need to know!
Drinking tap water can save wildlife »