In a previous post about wildlife cave play, I suggested you investigate a wildlife habitat at home if you couldn’t get to one easily. Well, we finally followed up on our cave lesson by visiting a cave!

It wasn’t a real cave, but an artificial one. (I hope that still counts?)

It was dark, it echoed, it had dripping water, it had stalactites and stalagmites… but best of all, it had those little creatures that shine light from their bottoms!

Visiting a glow worm cave is a fascinating experience. Firstly, it allows children to get up-close to the little larvae and see them in proportion (I honesty thought they were the size of an earthworm). It encourages wonderful scientific discussions about their glowing butt, and it allows children to experience an unusual type of wildlife species. 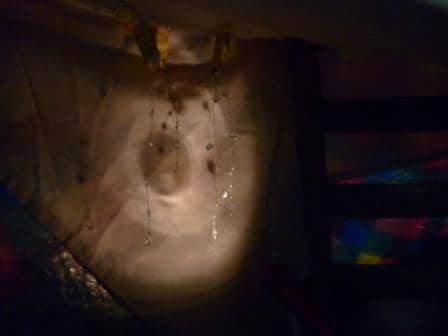 Before visiting, ask your child these questions:

See if your child can answer these questions after your visit as well.

Visiting a glow worm cave can be a stand-alone activity or you can include it with many other learning opportunities.

To protect the little creatures and keep them glowing their brightest for other visitors (they can turn their glow off if something brighter comes along) we weren’t able to take any photographs.

Thanks to Cedar Creek Estate for supplying the photo of the glow worm webs.